An old book I read in the late 1970s which I really liked and may have been the inspiration for the devices used in the Stargate TV and book series. This book is actually the third book in a series, but I highly recommend reading this one first. With the backstory more developed, it makes this one more impressive on first read, then makes the preceding books much better. 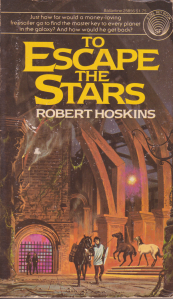 The full series is:

The key element of this story is the stargates. Unlike the titular devices in the media franchise of the same name, stargates in this novel are widespread and fairly well understood. Their origin is a mystery, but people use them all the time and the technology has been replicated to create even more of them. Every habitable world in the Milky Way has at least one. Most planets have several. They allow for instantaneous travel regardless of distance, and their existence means that humanity has colonized every world in the galaxy that it can survive on.

Tens of thousands of years ago there was a galactic federation of 77 planets. Earth was one. This was so far back in the past that Jamas is unaware of it. This federation set up Prime as the repository of galactic knowledge. The planet sends out census takers every few thousand years to learn what needs to be known and write it down.

There's stuff that makes the universe pretty interesting. Galactic history goes back a long, long way. There was once a galactic empire, then an interregnum, and now there’s whatever setup is going on right now. There’s risk of a second interregnum. Knowledge of the stargates was lost until somebody found one under one of Earth’s polar ice caps, whereupon people spread throughout the galaxy again. Some planets were inhabited, but all by humans. There don’t seem to be any aliens in this book, or if there are, this is one of those universes where even the aliens are human. It works well enough in this book because galactic history seems to stretch back so far and there are so many unknown details about what happened.

The main protagonist is Jamas Oregas. All the people in this book have names that are almost, but not quite, normal names. I suppose this has something to do with the story taking place far, far into the future. Lots of years. I didn’t get an exact number, but it’s a big one. We never get an explicit reference to modern times and how long it’s been, but the time spans in this backstory are measured on the order of tens of thousands of years. Sometimes hundreds of thousands.

Jamas and his business-pals are “freesailers,” a term that is never explicitly defined but is more or less a nice way of saying interstellar con-artists. His job at the beginning of the book―for the first half, actually―is to convince the people of Llango to give him and his associates exclusive control over the natural resources of the planet. Llango isn’t heavily populated, so the idea is that the exploitation of the planet won’t interfere with the population anyway. Llango has a lot of resources to be exploited, and whoever gets that contract will make a great, great deal of money.

Jamas pretends to be some kind of high official from Earth and makes all sorts of promises, all of which are scams. He offers to repair the planet’s satellite power system, saying that it’ll fail in less than a century. In return his company gets to mine the planet’s natural resources, most of which are fossil fuels.

It seems like the big conflict is going to happen when the Llangoans realize they’re being scammed. Sure enough, some of them do. One person does some research and finds out that there’s no danger in the near future for the power satellites, for example.

That conflict never happens, though. Near the middle of the book, it turns out that Jamas’s associates turn on him and try to claim more shares of the planet for themselves. He’s nearly killed and jumps through a stargate, figuring anywhere is better than where he is.

The narrative makes a sharp turn here. Instead of being a book about an interstellar con-man bilking some natives out of their oil, it turns into a grand galactic adventure that, perhaps unsurprisingly, also has some callbacks to Foundation. Jamas finds himself on Encyclopedia Planet, or the Planet of Scholars, or however you want to refer to this trope. In the book, the planet is called Prime.

Jamas digs around in the archives, makes a few enemies (he’s not a guy who makes friends easily, it seems), and discovers the current purpose of Planet College. There’s a mysterious planet out there, possibly the progenitor of humanity in space, called Alnia. The Alnians never went through the interregnum that dropped so many planets back into the dark times. They are likely the most advanced civilization in the galaxy…assuming they’re even still in the galaxy. Rumors of what happened to them are rife, but the most notable one is that they up and decided to leave the galaxy to itself, never to return.

Jamas figures that he can do what tens of thousands of years of Scholars from the Planet of Scholars can’t do and find the place. This is a bit annoying because it works. Jamas isn’t a particularly likable character, and he’s also not all that special. He’s a con-man, he can think quickly on his feet and all that, but to put him in a position where he rediscovers a long-searched-for race of people is a bit excessive. To be fair, the people of Library Planet have all gone backward a bit, placing Alnia into the realm of dogma with details never to be questioned, while Jamas, the outsider, can get a fresh look on things.

Jamas and some scholars go to a planet that he learned about, get into a bit of adventure, bypass a futuristic electric fence by shorting it out, and then go into an old castle. They meet some holograms and then find a stargate. The stargate takes them to a place where they’re addressed by another hologram that states it represents the Alnians, who have all died out. Their last gift to the human races of the Milky Way is that they have created some more stargates in another galaxy, one of the Magellanic Clouds. All the planets there are empty and waiting for humanity to come settle them.

Rating: (You must be logged in to vote)
Reply
This site contains copyrighted material the use of which has not always been specifically authorized by the copyright owner. We are making such material available in our efforts to advance understanding of environmental, political, human rights, economic, democracy, scientific, and social justice issues, etc. We believe this constitutes a 'fair use' of any such copyrighted material as provided for in section 107 of the US Copyright Law. In accordance with Title 17 U.S.C. Section 107, the material on this site is distributed without profit to those who have expressed a prior interest in receiving the included information for research and educational purposes. For more information go to: . If you wish to use copyrighted material from this site for purposes of your own that go beyond 'fair use', you must obtain permission from the copyright owner.