Pretty cool, you can now utilize Active Directory to manage Linux user accounts/logins. This article takes you thru the steps needed to get Linux Mint 20 to join Active Directory.

There are quite a few, but they are all needed to work together as they each handle one part of communicating between Linux and Active Directory.

Open a Bash prompt and enter the following:

When all that gets installed, you will need to restart your Mint Linux machine.

After your machine is restarted, you will need to edit the krb5.conf file to make it so Kerberos knows how to talk to your Active Directory domain (Note that a Kerboros "realm" and an Active Directory "domain" mean the same thing):

Let say your Active Directory domain is myhouse.home, edit the krb5.conf file to resemble the following (Swapping myhouse.home for your domain name):

Next, we need to make sure authentication is reloaded so it's aware of the new values:

Now we need to edit realmd.conf to tell it a bit more about MYHOUSE.HOME

In that file, find the [Time] section and set NTP to dc.myhouse.home:

After saving that file, run the following Bash commands:

OK, we're getting a lot closer. Next step is t/o "discover" the Active Directory domain that you are going to be joining:

In bash, run this:

If all goes well there, you should see some basic info about the myhouse.home domain and no error messages.

Make sure your Active Directory credentials can be used

Next step is to actually join the Active Directory domain:

Modify the file to look like this (Note that 'dyndns' on the bottom 5 lines are for setting DNS dynamically and has nothing to do with the well-known service dyndns.com, I had to verify that myself. They are needed even if not using dyndns.com services.):

Save that, then run this:

Finally, we need to make a change to Linux Mint's "Login Window" settings. Click on Mint's start button, then type 'login' and pick "Login Window" from the search results. 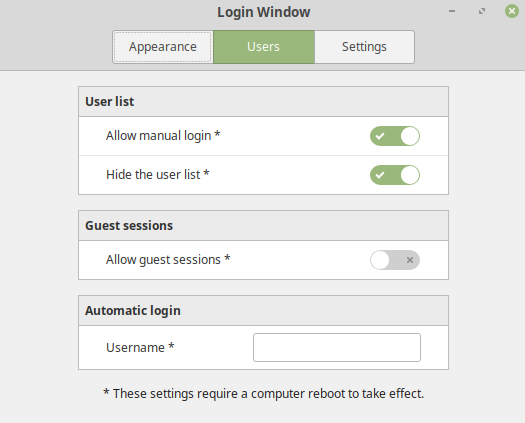 If you run into an issue where you can log in, but cannot do anything, give your Active Directory user account explicit permissions as follows:

Rating: (You must be logged in to vote)
Reply
This site contains copyrighted material the use of which has not always been specifically authorized by the copyright owner. We are making such material available in our efforts to advance understanding of environmental, political, human rights, economic, democracy, scientific, and social justice issues, etc. We believe this constitutes a 'fair use' of any such copyrighted material as provided for in section 107 of the US Copyright Law. In accordance with Title 17 U.S.C. Section 107, the material on this site is distributed without profit to those who have expressed a prior interest in receiving the included information for research and educational purposes. For more information go to: . If you wish to use copyrighted material from this site for purposes of your own that go beyond 'fair use', you must obtain permission from the copyright owner.